As with much of the old-timey gear which actually gets taken out bush, this map case is an item of army surplus.

It was manufactured in Australia in 1945 and was officially designated the “Map Case, Special, No. 1”, but to all and sundry was known as a jungle map case.

These were first brought into service in late 1943 as a replacement for the previous rigid, fibreboard backed British map cases which did little or nothing to protect the fragile paper map in the wet and humidity of the jungle. Made from tropic proofed canvas and designed to fold into a small parcel which could fit easily into a haversack, the “No. 1” case was designed for senior officers. There was a smaller version which was issued to junior officers and NCOs which was designed to fit into a shirt pocket. Australian army shirts of the day had rather large pockets. 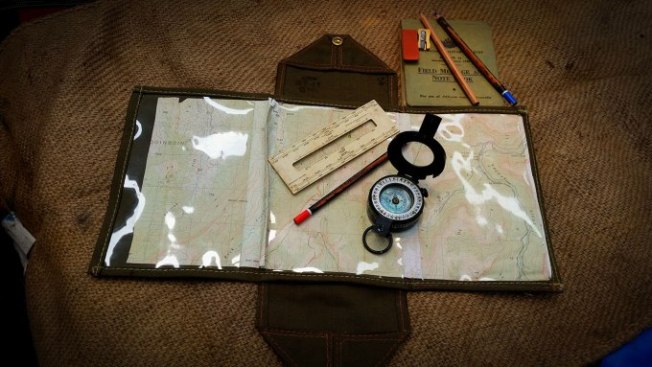 The jungle map case open and with period accessories laid out.

The map case folds open and has an acetate sleeve into which a map can be slid. This clear acetate could be marked with chinagraph pencils without marking the map itself. The case also held a notebook, pencils, sharpener and a protractor, everything needed for land nav in the jungle.

Jungle map case (left) alongside its predecessor, the rigid-backed General Service No 2, Mk. 1 map case. The old style case was terribly unsuited to a tropical climate and was large and bulky enough that it was designed to be slung from the shoulder. The jungle map case could be shoved into a map pocket on the trousers or stowed under the flap of a haversack or largepack.

The map case is made from 12 oz tropic proofed canvas which was both rot proof and water proof. I can attest to the fact that this canvas is absolutely waterproof. I have quite a large supply which came from the wall sections of a WWII tent. Secured around the top of a bucket, with an indentation in the canvas filled with water, there was no leakage or seeping through during my week-long test. Amazing stuff. 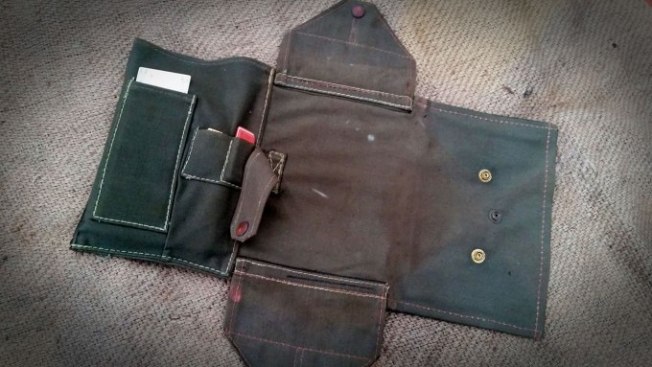 Rear of the jungle map case when opened out. Note the rear pockets for service protractor, eraser and pencil sharpener. Also note the dirty condition of the canvas. The map case was brand new when I received it, but I have taken it out bush dozens of times in all weathers.

I feel that this design lends itself nicely as a MYOVG (Make Your Own Vintage Gear) project. Made from canvas, leather or even from cordura nylon, it will be a satisfying project which will result in a very useable piece of gear.

Detail of the various pockets, including the pencil/notebook sleeve.